[“Head Full of Doubt/Road Full of Promise” – The Avett Brothers]

From the Desk of…

My mom has gifted me a desk. This simple sentence brings me more joy than I can possibly express. I have not had a real desk for the better part of a decade and even then it was that piece of my college furniture that served more as a resting place for books, sweatshirts, and sundry nonsense than it did as a useful writing surface. I already love this small wood structure an unreasonable amount and have great plans for its physical improvement (someone did this beautiful piece the disservice of “up-cycling” and painting its ornate solid oak surface a “shabby chic” distressed and dusty baby blue with seashell motif knobs – not exactly my style but there is a lot of scope for the imagination when it comes to putting it all to rights again). A writer needs a desk, and this one, with its current imperfections, is a reflection of the writer in question; a work in progress, as it were.

That being said, I’ve not felt able to call myself much of a writer lately. I have, as is common when I appear here for another episode of “Liz’s Mind Revealed”, been having a hard time. For the better part of six months I was waiting on one, final, piece of paper to tell me that I was entirely unto myself again. The waiting was a safe space in which to life, where I didn’t have to make decisions beyond the immediate. Now, I have that piece of paper and I feel adrift in an excess of choice. I keep asking myself where I go from here, what’s next for me? I had a temporary excuse for staying ostensibly in the shadows. That excuse is now gone and I feel the lack of it. I didn’t properly prepare for its absence. The void is scary as all hell, to be perfectly frank.

As a result, my drive to write and create has succumbed to the ease of simply consuming content. I have taken a backseat to the active living of an engaged life and have chosen (thankfully only for a few weeks but still too long for a conscious mind) to existentially stagnate. So far, I have finished four books in the span of 2018 alone, and I have reveled in the creativity of more than one TV or movie director. There is nothing wrong with this type of content consumption but it cannot be a person’s only source of amusement. Thankfully, the aforementioned ugly seashell knobs have been staring at me this week, their anthropomorphic eye shapes shaming me for my depressed and downtrodden complacency and urging me to live up to my, self-assigned but hopefully not totally unjustified, moniker of “writer.” I suppose my problem is a simple yet rationally indefensible one, when I consume too much from the world around me, I feel that every original thought I have pales in comparison to the outlandish and amazingly creative content that already exists. How many people have thought the same things I am working my way through?

What is the likelihood that anything I am saying has not yet been said?

Those are the rationales that tear me down and yet they are self imposed. I am making myself miserable by feeling inferior to people who inspire me. That is basically the definition of counter intuitive. It doesn’t make sense to feel simultaneously restricted by the people and stories that bring me joy. Just because I am not Neil Gaiman does not mean he would scoff at me. Yet, for some reason, I am scoffing at myself.

I am suffering under the weight of my own inferiority complex. As an approach to life, that is absolutely ludicrous. Even just sitting here typing this feeble diatribe I can feel the shroud of misery slipping from my shoulders leaving me exposed but exhilarated. Sitting down and actually banging out the shit storm shambles that my head continually creates is better than any therapy session or primal scream exercise. I am convinced that this internal urge to WRITE is something that other people don’t necessarily always understand but there are many comparable pleasures within the human experience. It is largely ineffable in its simplicity but can be compared to a satisfied food craving or the feeling of sunshine when it’s been cloudy for a week. It is the need to go out for a run or to get lost in music. It’s a desire for catharsis. It is essential.

Through the course of my content consumption I stumbled upon a 2013 Scottish indie film (those words essentially encompass half of my favorite things). Not Another Happy Ending features Karen Gillian, a novelist struggling with her own feelings of inadequacy, relationship troubles, and mental blocks, who finally lands on one stunning truth: “You don’t have to be miserable to write. You do it because you have to, because it gnaws away at your insides if you try to ignore it. Because if you don’t write, you might as well be dead.”

It will come as no surprise to (hopefully) all of you that I have no intention of being dead. Therefore, I cannot deny this part of myself. It does eat me up inside when I deny this part of my personal expression, this passion of mine. These ideas and words have been beating down the proverbial doors of my brain. Struggling for light and air. Desiring to be seen and understood. Held captive by my fear.

It’s not necessarily considered on-trend, socially, to express and feel deeply. So, I suppose I am not on trend. But my mind is sated and that’s not a state of being I can complain about. Passion and expression thy name has been… someone else. Until now.

As with most of my realizations, this was not a finish line I reached easily or alone. A perfect storm of people have coalesced into a warm drive to better my current situation and mentality. First, it’s likely a bad idea to derive meaningful life advice from a stand-up comedian but I am going to anyway. I have spoken of Kyle Kinane before because I find joy in the simplicity he espouses. Specifically, I like his approach to never allowing the world to get him down: “I am happy because I discovered one of the keys to happiness. It was simple… All you need to do is redefine for yourself what a miracle is. Just loosen up your definition of what a miracle can be. All a miracle is, is the world letting you know it can still surprise you.”  He goes on to explain a recent miracle within his own life, I wont ruin it for you, but I am astounded by the truth of his initial statement. Many of us become so complacent in our own lives that we lose the ability to be surprised. I am not satisfied by so narrow an existence and so I have begun looking for miracles in the everyday.

One such miracle presented itself, surprisingly enough, during the key-note speech at an International Alumni Engagement conference I attended in Chicago last week. The organizers invited President Emeritus of NYU John Sexton to speak to the assembled fundraisers and engagement professionals. Colloquially called “J-Sex” by his students, President Sexton is the quintessential definition of down-home, straight-talking, Brooklyn native. I have never seen a group of conference attendees so entranced by a single speaker. He lit up the stage with his no-nonsense approach to higher education administration, but more importantly with his approach to life. He began by telling those assembled that the most important thing in life, the only way to be successful, is to like yourself. If you don’t like yourself first, you aren’t good company and good company is what we all seek; personally and professionally.

You won’t sell someone on a concept if they can’t stand to be around you. And isn’t that what it means to be alive? We all exist within our own spheres and we have our own passions. Our interactions with others depend on our ability to represent those passions and find common ground. This grand man with a legion of accomplishments spoke to very simply truths that exist at the base level of each of us. He preached the importance of passion and love within life. Not only was he a recent miracle in my life, but he helped me frame the others in the recent past, as well as the ones to come. He proclaimed the virtues of being a “possibilitarian.” Someone who is invested in their story and focused on seeing it continue.

So here I sit, with my glass of wine, at this beautifully flawed desk, a proud possibilitarian. Scared for the future but anticipating joy, or at least a learning experience or two. And so I encourage you. Be mighty yet tender. Thrive not from your over education or internal imperviousness, but from your inherent emotionalism and obstinate resilience against the slings and arrows of outrageous fortune (always gotta have a hat tip to Shakespeare). Become a guiding light, a miracle, to others. My favorite greeting card I received in my childhood said “If the neighbors aren’t wondering, you’re not trying.” Make them wonder, make them laugh… Be surprising.

I bring you my last miracle in this series of recent inspiration from unlikely places. The source for this one was of a work featured on Instagram from poet and artist Lora Mathis: 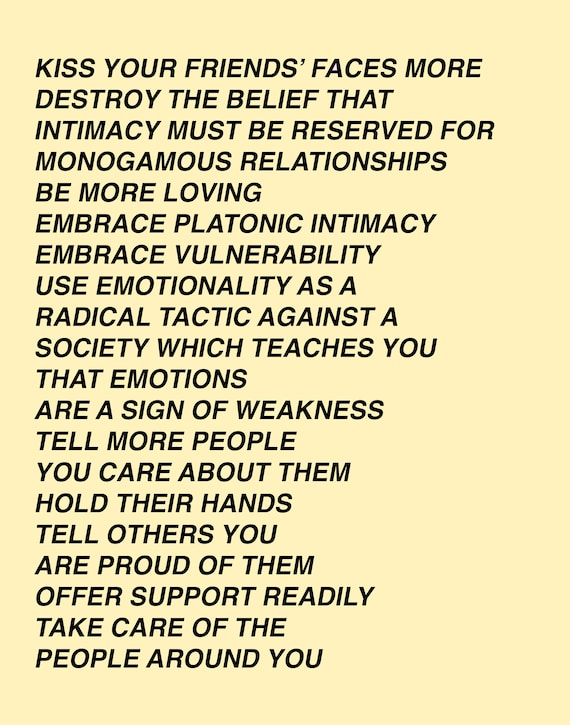 My grasp on vulnerability is tenuous at best. But it is by emulating the beauty found in the obscure that I am managing my halting way forward. All because “I like things to be story-shaped.” I like to live a life of meaning. A life with a beginning, middle, and eventual end. A life with lessons on morality and beauty.

In this story of a life, I refuse to let anyone be in doubt of my love, and within that group I am proud to begin to count myself among that number. It has been a long time coming.

Regardless, now my head can rest easy. Now less perturbed by words waiting to be said.

“Courage does not always roar. Sometimes courage is the quiet voice at the end of the day saying, ‘I will try again tomorrow.'”