Ruminations as I sit and watch Clue, one of the best movies in the entire world, after having passed out candy to the neighborhood kids. This movie is perfect for Halloween celebrations and an ideal complement to The Addams Family, which I watched earlier this week. Now I just need to watch Young Frankenstein and I am set!

Tonight, I am Louise Belcher. 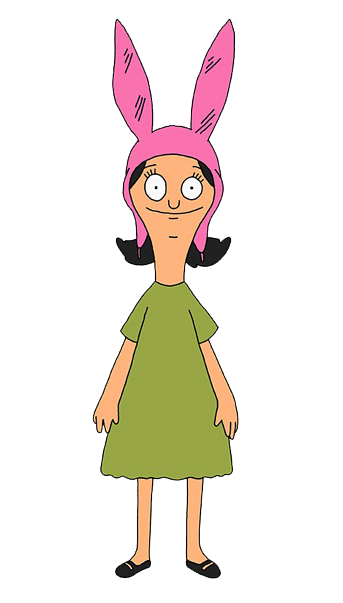 While I was visiting my brother, we began a Bob’s Burgers conversation. This type of conversation commonly occurs because let’s face it, the show is hilarious, relatable, and fun to talk about while drunk. So, it was during one of these conversations that we realized each character is one facet of a whole personality and that people identify with a character based on the predominant personality type being represented (yeah, I told you, there was drinking. It sounded deep at the time). Regardless of how utterly ridiculous we sounded, it was fun to strike up conversations with the people around us, mostly of the same age, and ask them a) if they had seen the show and b) who they identified with the most. It was great to hear the surprise and then see the concentration on the faces of those questioned as they deliberated internally. We created funny connections where my brother is Bob but becomes Gene when he is drunk. I am Tina but I strive to be Louise and what I usually end up with is Linda at her most manic (“C’monnnnn Bobbyyy…”).

I Have Loads of Character

Having an understanding of the characters I identify with has always been important to me. It doesn’t matter if they are from a TV show, movie, book, even to an extent, the people I choose to admire in real life; these overblown personalities we choose to identify with say something about the way we see the world and how we behave. Halloween is the opportunity to step out of your comfort zone and pretend (in an effort to get candy, a noble goal) if only for a few hours, that you are something or someone else. Halloween is an opportunity to put an aspect of yourself out there that is rarely if ever seen.

So, keeping that in mind, it’s ridiculously fun to sit on the front stoop and watch the procession of children go by. A parade of Grim Reapers, Wonder Women, adorable Finns and Reys, tiny football players (lots of Carson Wentz fans), and more than one Elsa. My favorites of the evening? One kid was a taco. Just a taco. It wasn’t a pun or anything more elaborate. I respect that (that’s what I am taco-ing about). Another kid, with the largest faux-‘fro I have ever seen, was Bob Ross.

Bob Ross? Wonder Woman? A taco? Awesome! Seriously, how much more can I really say? These kids were wearing their hearts, not just on their sleeves but their entire bodies. I don’t have kids, but I was one, and I have been around them enough to know that Halloween costumes are important. They wore something that they liked, no one would have been able to convince them otherwise.

Yes, I know I am reading quite a bit into what has now become a retail and sugar-binge holiday. But hell y’all, it’s FUN.

Why is it Important?

No matter what, I believe kids (and adults) should be allowed  and encouraged to be inherently themselves. Everyone has bits of weird in them. I say, celebrate the weird. It makes life more fun. But, that’s an ideal world. Halloween allows us to live in that world for a little while. You get to show off the things you love without having to truly worry about being judged.

I don’t know about you, but I worry entirely too much about being judged. So, because it’s likely that I am more wrapped up in weird anxieties than you, take the night and imagine that you are braver than usual. Let your freak flag fly and have some fun with it. Be Bette Midler in our quintessential 90’s Halloween movie. Rock the Edward Scissorhands look (just be careful where you wave those things). Lions, tigers, bears (oh my!), Buzz Lightyear, Khaleesi…

What the hell? Be a TACO!

Have some fun and throw off the shackles of normalcy. They are overrated and constricting.

As, I’d hope is apparent, this post is definitely an imperfect metaphor. It’s all well and good to want to dress up as a zombie or vampire but this doesn’t mean you should take it too far. Practice your zombie walk and Transylvanian accent, but please don’t eat people and then say I encouraged you to do it. I am not about that life. I just thought it was important to make that distinction…

The spells I cast aren’t THAT good. Just some words strung together to help inspire fun and frivolity. I ran out of newts eyes, so my potion potency is seriously lacking.

*Of course, it had to be this version. It is Halloween after all! “Sistahs!”

“Courage does not always roar. Sometimes courage is the quiet voice at the end of the day saying, ‘I will try again tomorrow.'”